No Rooms at the property match your requirements 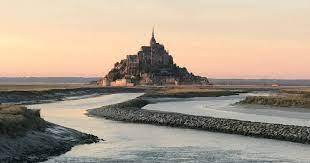 For centuries, the island of Mont Saint Michel and its abbey have been an endearing place of pilgrimage and a long-standing symbol of France. Located 1 km in the bay shared by Normandy and Brittany, the gravity-defying abbey is truly spectacular for its unique location and the combination of its Gothic and Romanesque architecture. Those wishing to follow in the footsteps of other pilgrims may be interested in crossing the bay on foot with a guide during low tide.

The region surrounding the Mont is marked by rich agricultural land, as well as by the pastures of the AOC and POC pre-salted lamb. Visitors will also find local producers of Norman cider and Calvados, characteristic of the region.

The Mont and its abbey, known under the name of "Les Merveille", have been classified as a UNESCO World Heritage Site. With its impressive view over of the bay, it is one of the most visited and impressive sites in France. 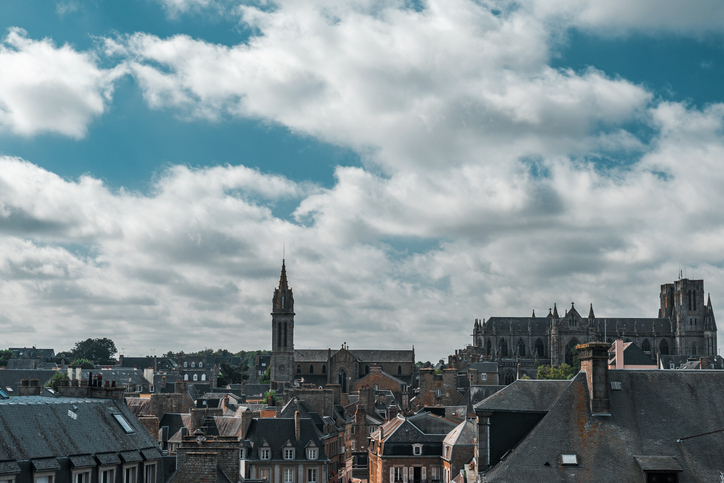 Overlooking the Bay of Mont Saint Michel, visitors to Avranches will witness breathtaking views of the surrounding area, including Mont Saint Michel from the Château d'Avranches as well as the renowned Botanic Gardens.

Avranches also hosts the Scriptural Museum, the home of the vast collection of rare manuscripts once housed in the Abbey of Mont Saint Michel.

At the heart of the city, a looming monument to General Patton and his forces reminds visitors of the daring campaign to liberate France. Visitors can journey along La Voie de la Liberté (Liberty Road), marking the path of Allied Forces in their liberation of France. 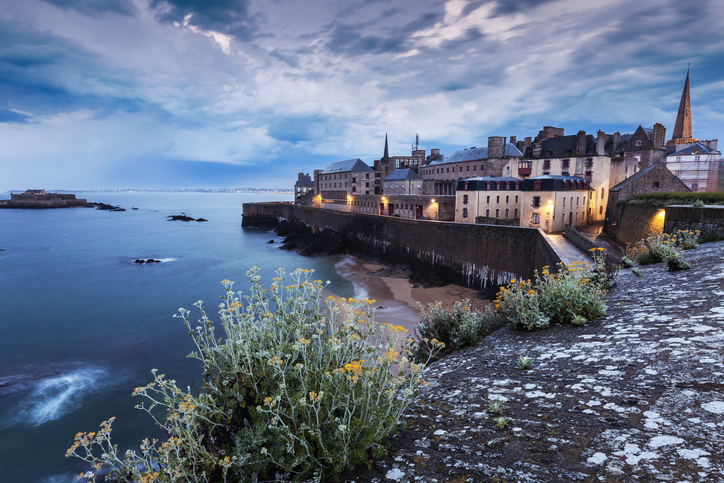 The famous port and walled city of St. Malo has a rich maritime history, touting fishing, exploration, and vicious privateers. Serving as and profiting from being an important port of trade from as early as the 1st century, the city provides a glimpse into both exploration and wealth with its many malouinières (manor houses) and monuments to maritime explorers, including St. Malo born Jacques Cartier, famous explorer of North America in the 16th century. Visitors will find streets filled with an abundance of shopping, fine dining, and stunning architecture, including that which was restored after the Allied Invasion of WWII. 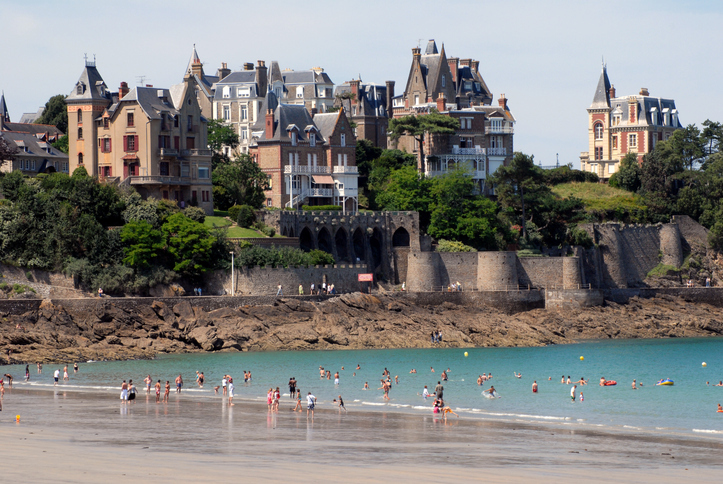 Originally founded over 1000 years ago, Dinan is considered by some as “the prettiest town in Brittney.” Its impeccable preserved half-timber houses, cobblestone streets, and castle instantly transport visitors to the past. Noted as a Ville d’Art et d’Histoire (Town of Art and History), one will find a treasure trove of skilled artisans and quaint shops amongst the picturesque site of preserved medieval history. 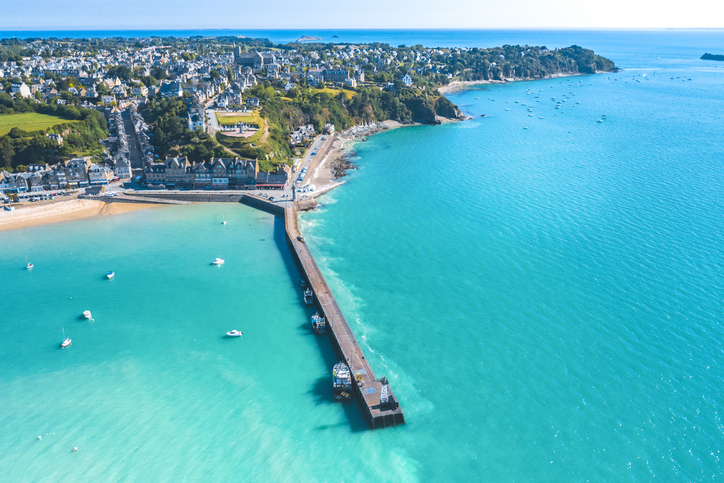 Famous in France and around the world, oysters are synonymous with Cancale. For hundreds of years, the tradition of farming and harvesting mollusks has been a staple to the community and visitors will find nothing short of a feast. The charming city offers not only inspired dishes at restaurants overlooking the Bay of Mont Saint Michel, but also the opportunity to take a culinary class highlighting the oyster from the three Michelin star chef Olivier Roellinger. 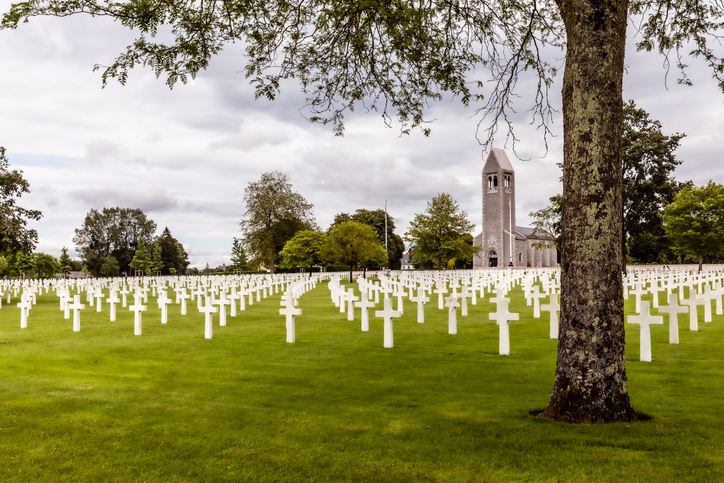 Sprawling over 28 acres of rolling farmland, the impeccable and moving Brittany American Cemetery serves as the final resting place for over 4,400 American servicemen lost in the WWII campaigns in Normandy and Brittney. Visitors will find tokens of memory, as well informative narratives outlining the harrowing efforts made in the liberation of France. 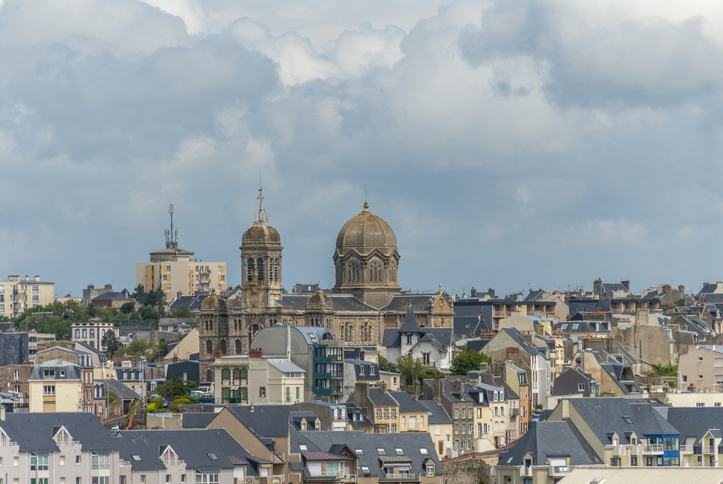 Atop its seaside cliffs, Granville provides stunning views of the Bay of Mont Saint Michel. The medieval upper city and headland of Le Roc reveal a mélange of influences: Medieval English and French fortifications and churches, as well as 20th century German turret stations due to its strategic location.

The town not only sports a rich military history, but also served as the childhood home of Christian Dior, where the pink cliffside villa now serves as the Dior Museum. Visitors who visit the town for the famous Carnival will be immersed in the costumes and pageantry that heavily influenced the renown designer. 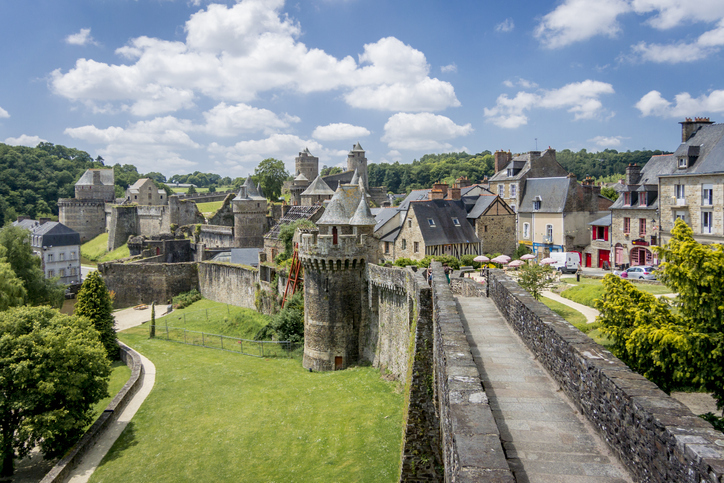 The city of Fougères has long inspired writers, poets, and artists with its picturesque gardens and imposing Medieval citadel. Set amongst steep slate cliffs and lush marshlands, the Chateau de Fougères is one of the largest medieval fortresses in Europe. Visitors will no doubt be in awe of its imposing towers and the Nançon river providing a natural moat. Winding cobble stone streets and half-timber houses at the Place de Marchix lay just outside the fortress walls, with many traditional trades still in practice including tanning, dyeing, and papermaking. Superb views from the upper city’s public gardens as well as the bell tower of St Léonard’s church capture the beauty of the town and surrounding area. 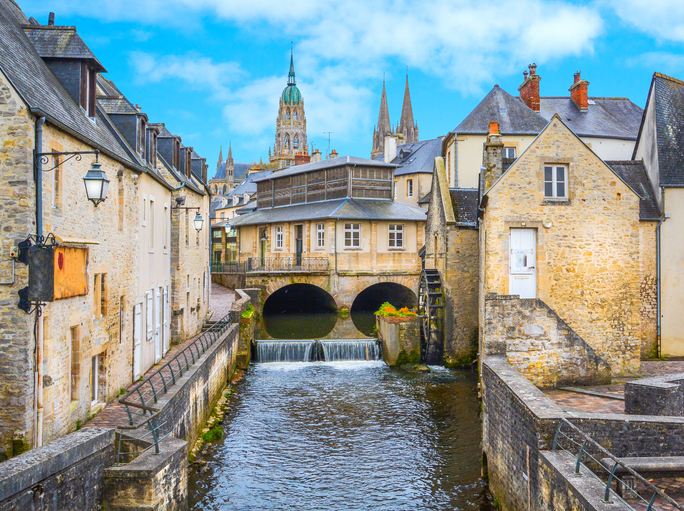 The medieval city of Bayeux is home to the renowned and UNESCO registered Bayeux Tapestry: a 70 meter long record of the conquests of William the Conqueror. The 12th century Notre-Dame Cathedral, also dedicated to Willam, serves as an unmatched and beautifully preserved example of Norman architecture.

The city of Bayeux also provides an invaluable experience for WWII enthusiasts. The Memorial Museum of the Battle of Normandy of the Battle of Normandy provides in depth information on the Allied Invasion of France. The city also serves as the site of the British Military Museum, commemorating the British servicemen lost in campaigns to liberate France. 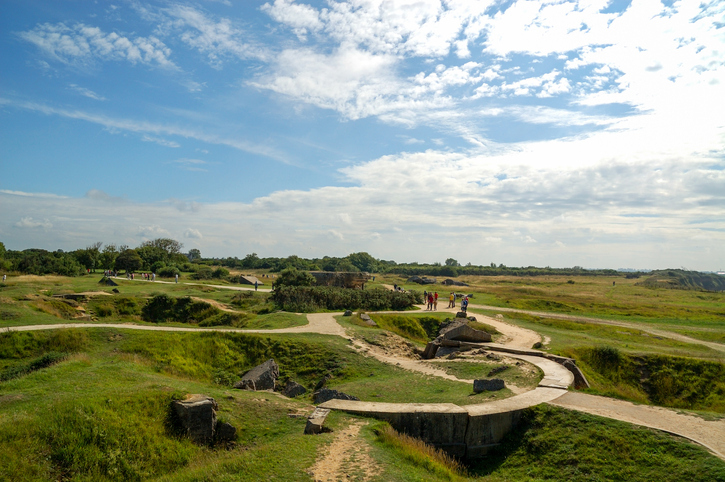 Known as Operation Overlord, the landing on the beaches of Normandy by Allied forces was the beginning of liberation for France and Western Europe. Located in between Omaha Beach and Utah Beach, Pointe du Hoc was a key defensive position for German forces in WWII. it's subsequent capture on the 6th of June 1944 by American Rangers was a defining piece of the Allies’ success. The area, still showing scars from the furious artillery battle, remind visitors of the scale and devastation of the battle. Memorials, cemeteries, museums and commemoration sites can be found all along the 70 km stretch from Sainte-Marie-du-Mont to Ouistreham. Originally founded in 1800 by Jean Le Chevalier and René Le Berriays, cultivators of the La Luise-Bonne pear, the hillside Botanic Gardens of Avranches provide breathtaking views of the Bay of Mont Saint Michel in its vast entirety. 12 beautifully manicured gardens, ripe with over 800 species of plants and foliage from around the world, have inspired 19th century writers such as Guy de Maupassant, Victor Hugo, and Stendhal, with their beauty.

This website is edited by Château La Rametière, 2 Route de La Rametière, Plomb, 50870, Le Parc, Manche, France. Tax / VAT number: FR48 898 413 430. We use cookies to ensure you have the best experience and any personal data shared during your visit is protected by our privacy policy